Culture Matters is taking an initiative in the midst of the Covid-19 crisis to compile a second anthology of working-class writing. We hope it will be one way for working people to creatively express their anxieties, experiences and thoughts about various aspects of their lives in these troubled times.
Our first anthology of working people’s poetry from contemporary Ireland, The Children of the Nation, was a success in the U.S. and Europe, as well as in Ireland. This second volume will focus on short prose: flash fiction, short stories, anecdotes, epigrams, memoirs and other kinds of life writing (diary, letter/email, essays, blogs, and black and white images).

Relevant themes that come to mind include the Climate Emergency, the Coronavirus Crisis, Working Women, More Than Profit, and Community and Global Solidarity – but also quite simply your everyday experience as a working person in contemporary Ireland. We are unable to offer fees for publication, but will supply free and discounted copies to contributors.

Here are the stipulations:
·         One or two submissions per person, unpublished in print
·         Maximum of 2,500 words per submission
·         In English or Irish (if in Irish, our international readership will appreciate your English translation, please)
·         Black and white images should be jpegs of photos, drawings, cartoons etc., no bigger than 1MB.
·         A brief biography outlining your connection with the working class, 150 words max.
·         Deadline for submission: 31 July 2020.
·         Submissions to be sent to: irishstories2020@yahoo.com
You retain copyright on any submissions but your material may be published in print and online by Culture Matters.
Jenny Farrell
Associate Editor
Culture Matters
March 2020.

The Corries- My Dear only Love {Rare Recording}


"The Great Montrose" they called him and I first came across this I don't know when. James Graham, the 1st Marquess of Montrose is remembered today as the brilliant Scottish General in the War of the Three Kingdoms. The title should read, "My Dear and Only Love" but I'll let the Corries tell the story. They say General Montgomery used a verse from this to rally his troops before the Normandy Landings. (Wikipedia). Montrose died as he wrote. (1612 - 1650)

He either fears his fate too much
Or his deserts are small
That dares not put it to the touch
To win or lose it all.

Roy Williamson of the Corries wrote "Flower of Scotland". The other member above is Ronnie Browne.

Labels: James Graham, My Dear and Only Love., The Corries, The Great Montrose


Considered one of the greatest of the Arab poets of the Islamic Golden Age, he lived between 915 AD and died as he wrote in 965 AD. Worth a visit over to Wikipedia, or other places to read up on. Enjoy. Loaded by MediaWontShow and with thanks also to the old share button on Youtube. Stay safe.
Posted by Frank at 1:00 PM No comments:

Due to Coronavirus health concerns the Trim Poetry Festival and book launches have been postponed!
Posted by Frank at 1:32 PM No comments: 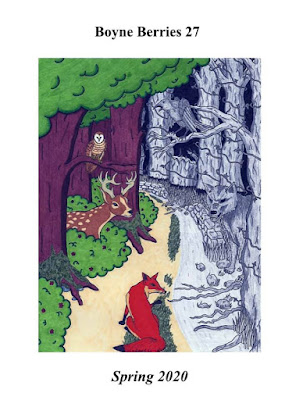 If you happen to be in the south Meath area this weekend coming then why not drop in to The Castle Arch Hotel for the launch of the above magazine. Cover design is by Rory O' Sullivan and edited by Orla Fay, the magazine contains the ten poems shortlisted for The Trim Poetry Competition. Part of a festival that runs over both Friday and Saturday, full details of which can be found on the Boyne Berries site (Link to the right) and also info on Orla Fay's site as well as Michael Farry's whose own book Troubles will be launched on Saturday Night. There are workshops and an open mic session as well. 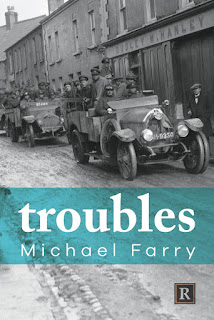 Sure to be an interesting weekend but check their sites for full details and names of all involved. Will drop in at some stage. Good luck to all. 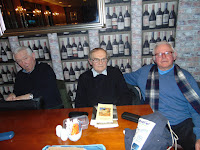 Only a small number turned out for our March meeting on Thursday night last, five in all, though we still managed to get through a good number of poems and stories. Once upon a time there was as many as up to twenty in the group though the average was always about twelve to fifteen, or something like that. The group was formed way back about 1991 and has continued to meet every month since then. Though in the VEC days there was a meeting at least every week in different locations. We plough on!
Posted by Frank at 12:52 PM No comments:


Rumi was a Persian poet who lived between 1207 and 1273. A theologian, scholar and Sufi mystic he is considered one of the great poets of the world. Loaded by Adam Siddiq and with thanks to youtube and the share button. The translation is by Coleman Barks. Must get back to. Also have a look at some of the great Arabic poets. When time allows!
Posted by Frank at 5:41 AM No comments: