This is a fine song indeed from Johnny McEvoy and one I hadn't come across before. Johnny has been singing great ballads since the sixties and this one is up there with the best. Give a listen! With thanks to youtube and the person who loaded!

Note: The next meeting of The Meath Writers' Circle is on Thursday the 5th of March in the Trim Castle Hotel.!
Posted by Frank at 7:23 AM No comments:


There are any number of anniversaries just around the corner and 2015 makes it a hundred years since the landings at Gallipoli and also two hundred years since the Battle of Waterloo and with 1916 coming up next year, and any number of other ones I'm not familiar with, there's no shortage of things to remember. Wellington's family were from just up the road and a large part of his army was Irish, or so I have been told, and his sense of humour was certainly local while Napoleon had a fair number of them on his side and the horses were all Irish. Well maybe I exaggerate a bit. I wonder if the Turks had any on their side. Samuel Johnson remarked that, "the Irish are a fair people, they never speak well of one another" or something like that and I'd imagine it's because they manage to find themselves on both sides of any argument or in any war and it marks them perhaps or maybe. As Billy Joel sang in Goodnight Saigon "And who was wrong and who was right". Emily Lawless who was from a Unionist background and with connections to Dunsany, writing of The Wild Geese penned the following.

That's Emily look her up sometime.

Poetry Ireland and Trócaire are inviting entries for their fourth All-Ireland Poetry Competition. The theme for this year's competition being "Feeling the Heat". The closing date for the competition is Friday the 13th of March and further info and details can be had at link: www.poetryireland.ie and also at: www.trocaire.org

You can download an entry form from the above sites and the competition is free to enter. The competition invites poets of all ages, from primary school through to adult, published and unpublished. Entries will be judged by Mary Shine Thompson, former dean of St Patrick's College Drumcondra. (Dublin City University), by poet Theo Dorgan, and by Trócaire's Trish Groves. The categories are for Adult (published and unpublished) Post-Primary Schools (junior and senior) and Primary (junior and senior). Winners will be notified no later than Friday the 8th of May.and there will be an awards ceremony on Wednesday the 27th of May in the National Library of Ireland, Kildare Street, Dublin 2. Interesting prizes for winners and runners-up and highly commended in all categories but check out the links for rules and conditions of entry and entry forms and good luck! Minimum of three entries per person!

The Listowel Writers' Week runs from Wednesday the 27th of May to Sunday the 31st of May with a closing date for competitions of Friday the 2nd of March, which is pretty close. There are any number of competitions and I counted twelve in all, so sure to be something to suit the pen. Details on how to enter and prizes if you should be so lucky can be had at link: www.writersweek.ie
Entries can be submitted online for those who are so inclined and that is I suppose just about everyone these days though I'm still at the envelope stage. Overseas cheques and postal orders not excepted! Entries can be sent by post and paid for by debit/credit card.Details also to be had at telephone no: 00353 (0) 68 21074 or info: info@writersweek.ie Do not send cash; check out the link and good luck!

"Reflections of Time" is a beautifully produced book of poems and illustrations by Verona Pentony and is her second book to date, the other being "Reflections from the Heart" which was published in 2012. The poems and the odd short story here reflect on both her travels and her take on the everyday and her keen eye for the things that inspire. She grew up in North County Dublin and spent her summer holidays in Leitrim and she draws on these and her experiences abroad for many of the poems inside. Published by the Universal Publishing Group the book retails at €15 and Verona has her own website at:
www.veronapentony.com

A member of The Meath Writers' Circle Verona has visited and participated in many literary festivals throughout Ireland and has a keen interest in travel. Her previous career as a hotel manager has taken her from London to places as far away as Costa Rica. 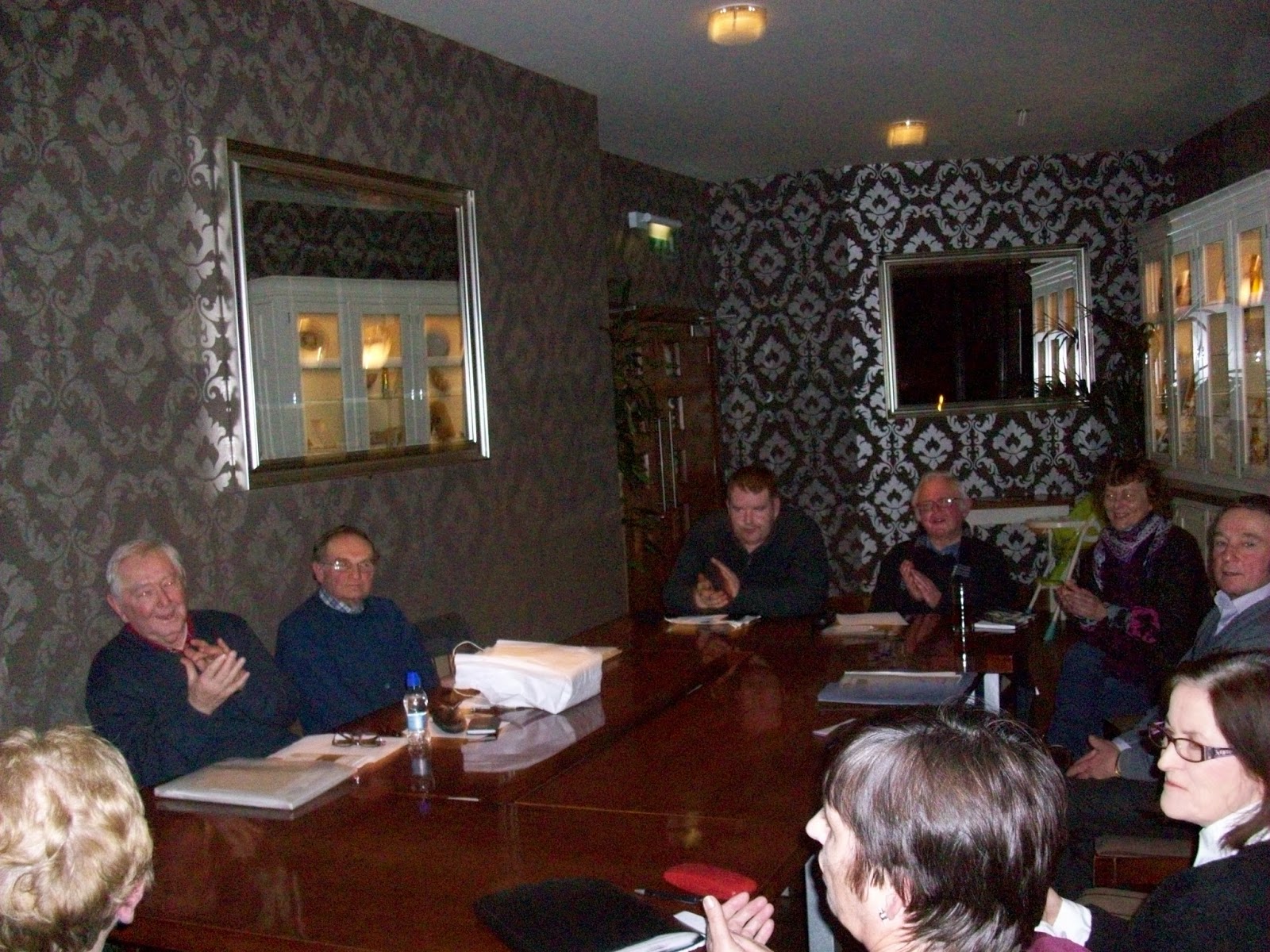 About fourteen people turned out for the first meeting of the year last Thursday night in the Trim Castle Hotel with great debate and poetry reading and arrangements to be made.. A children's writing competition is planned for later in the year and hopefully everything will be in place by the next meeting. Two members of the group had books published last year and both launches were a great success with something else in the pipeline with regard to one of them this Summer. Still gathering material for the 1916 celebrations and slow and steady as she goes. Will it all come together and what shape or shades will it reflect on. Could be interesting. Noel French of Trim Heritage has events planned for the anniversary and it would be nice to go for a launch around then. Those of you who haven't penned something yet, time to get the inkwells out. Finally a big thank you to everyone at the Trim Castle Hotel who have accommodated the Writers' Circle over the past number of years.
Posted by Frank at 6:01 AM No comments:

"A Poem For Ireland"

"A Poem For Ireland"


So what did you make of the poem for Ireland and the public have until March the 8th to get their votes in, or at least I think it's about then. Hard to argue with most of the choices but maybe one or two you wouldn't be familiar with. I mentioned Davis but since it was over the past hundred years that's him out. Of the poems selected "1916" by William Butler Yeats would seem to be the obvious choice but then "Dublin" by Louis MacNeice is just as likely and there is a great version of that on youtube recorded in Galway and borrowed it myself once a upon a time. Yeats was a really brave writer but when you're that good I suppose it's easier to be brave. Evan Boland's "Quarantine" is a good one as well but so are the ones by Patrick Kavanagh and Seamus Heaney. I suppose it all depends on what you measure them by. Maybe there should be a poem for every county and who would get in or be left out. It would certainly make for some reading.  A poem for Meath, who do you think?

Labels: "A Poem For Ireland" The last hundred years!

"From the Well" Short Story Competition"

"From the Well" Short Story Competition.


The Cork County Library and Arts Service have a short story competition out there that is free to enter and  with a closing date of Friday the 20th of February so a bit of time yet to get something in. The competition is open to anyone over 18 years of age who is a registered library member.To mark the UN International Year of Light 2015, the theme of this year's competition is "Light" though you may interpret this in its broadest sense! The conditions of entry are as usual with the exception being that you must be a library member. Stories to be less than 2000 words on any subject and must be fictional. Must be the original work of the artist and not have been previously published or, accepted for publication elsewhere. Must be typed  on A4 paper and accompanied by an entry form which can be download from the site. For further info contact:

Sinead Donnelly, County Arts Office on 021-4346210. E-mail: sinead.donnelly@corkcoco.ie
Do not put your name on story but you know that anyway and one entry per person.

Twenty stories will be shortlisted by judges Claire Kilroy, Declan Meade and Billy O' Callaghan and the winning entries will be announced in March/April of 2015. Copyright to remain with the author but Cork County Library and Arts Service reserve the right to one publication and/or one broadcast of shortlisted stories. Submission deems acceptance of the above and good luck! You can drop your entry into your local library or send it to: The Arts Office, Library Headquarters, Carrigohane Road, Cork.