The theme of last Tuesday night's meeting was one of humour and the poems of Ogden Nash were more than a favourite with some of our readers, though a wide and varied selection was recited to some applause. Humour being something of an uninvited guest at "poetry readings" it was refreshing to have it as the main theme and some of the poets whose work were included are, T. S. Elliot, Edward Lear, Reginald Arkell, Jenny Joseph, Pam Ayers, Eleanor Farjeon, John D. Sheridan, Amanda Ros, Vincent Caprani, Rose Milligan, Seamus O' Brien, John O' Brien and Robin Flower. Others whose poems were recited included Carol Owens, Willie G. Hodgins, Frank Murphy and a fine "Ode to Me" by Ronan Rogers.  "The Ballad of Gough" by Vincent Caprani is worth a go look see! Have to admit I'd never heard it before.

Posted by Frank at 11:06 AM No comments: Links to this post


Just a reminder though maybe a little late. The "Poetry for Pleasure" group meet on the third Tuesday of every month in An Tobar, Ardbraccan, Navan and the next meeting is tomorrow night where the theme is on humour!. You can contact Jim at 087 967 6728 or Jackie at 046 907 8973. The meeting time is 7.30 pm and light refreshments will be served afterwards.
Posted by Frank at 3:47 AM No comments: Links to this post

Another fine poem and with thanks to Tim Gracyk who posted and of course to youtube for the share button.
Posted by Frank at 12:10 PM No comments: Links to this post

Mask of Anarchy from memory

I think it should read, "The Masque of Anarchy" but this is a powerful piece of oration and nothing much has changed in two hundred years. By Percy Bysshe Shelley. Loaded by Mark Krantz and with thanks to youtube and Mark. (Only a few verses!)
Posted by Frank at 12:32 PM No comments: Links to this post

Shostakovich - The Gadfly - Romance (Last Night of the Proms 2012)

Connections right back to Cork in Ireland and one of England's most famous spies. Look it up! With thanks to Mandetriens who posted and youtube.
Posted by Frank at 12:31 PM No comments: Links to this post

Though somewhat delayed our Christmas party was a great success last night with over twenty in attendance and a few guests dropping in later in the night. The food was absolutely excellent so congratulations to the chef and all there who looked after us so well. The conversation touched on everything you could imagine, before ending in some fine "spirits" for those who weren't driving and more than a little humour and liveliness for those who were. To the year ahead!

Posted by Frank at 1:15 PM No comments: Links to this post 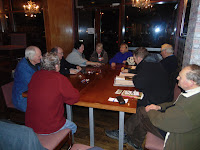 The Meath Writers' Circle held their first meeting of the year last night with about nine in attendance and with our somewhat delayed Christmas party that will follow tonight. Our magazine sales have tapered off at over four hundred sold and maybe or perhaps we'll even get that up to another twenty or so but time to be thinking of the year ahead. Another project agreed on last night was a poetry competition for primary schools but more on that to follow later. The night ended off with a few poems and perhaps one of the best short stories I've heard in years. Just be careful what you pick up off the road.
Posted by Frank at 4:35 AM No comments: Links to this post