The above titled by Carolyne Van Der Meer is described as a creative reinterpretation through short stories, poems, and essays of the experiences of her mother and other individuals who either spent their childhoods in Nazi-occupied Holland or were deeply affected by the wartime there,.Much more info about the book can be found here just type the details to the search box when it comes up. Carolyne has been widely published and some who are local may remember her when her poem "Atonement" was published in Boyne Berries 11. What was curious about that was that it had exactly the same first line as Michael Farry's "Road Trip" which was on the opposite page. And two very good poems they were! A curious thing about the period seems to be the absence of any really well known poems or poets that touch on the experience as opposed to those of the first world war and their more celebrated collections. Maybe there was an ideal they could hark back to. Maybe it's just me and I'm not familiar with it. Maybe these guys don't do poetry! The scene from "Cabaret" of the little boy on the box at the roadside cafe just about sums it up. The horror from the other side....I watched some of "Schindler's List" the other night and too few of him about. Nothing much was learned though, just turn on the news. Carolyne's book has a release date of January 2014. Check it out at WLU Press.


Well the fund raising goes on and last Friday night saw Jack Quin's of Scurlogstown as the venue for our table quiz.. Willie was the quiz-master for the night, if that's the correct term and I ended up doing the score board myself though Betty had them all totted up in short order indeed. The winning team was excellent and I think they only missed about three questions for the night though the runner-ups came a close second. Willie presented them with the prize and despite a few shouts from down the back, thanked everyone for coming and hoped they'd be there for the next one in Summerhill on the 28th of August. There was plenty of food,  good company, a lively atmosphere and I really didn't know some of the answers!
Posted by Frank at 4:03 AM No comments:

Looking through some of the videos on the "Sheriff from Navan" site I came across this one of Sean Reilly singing of Dan O' Hara, who was forced to emigrate to the States in the eighteen hundreds when his rent was increased. The more it changes you might say! Sean is a member of both The Meath Writers' Circle and the Small Impact Writers Group in Navan and if you click on this on youtube you'll see he's notched up more then three thousand hits. Way to go! I think this was recorded at the launch of the calendar by the Small Impact Writers Group for 2012.  Link to "Sheriff from Navan" over to the right where there are a number of other videos worth a look including Sean's contribution in the Swift "Battle of the Books".

Teresa Brayton ~ In an Irish Twilight

Teresa Brayton ~ In an Irish Twilight 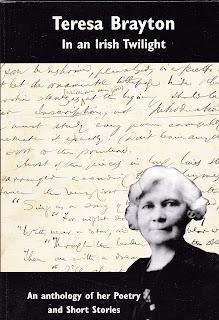 The above seems a well chosen name name for this collection and is one of the poems included here. This collection was first published in 2002 and is now reprinted by the Teresa Brayton Heritage Group in Kilcock County Kildare. Border side anyway! Most people will be familiar with her most famous poem "The Old Bog Road" which was set to music by Mrs. Madeline King of Rochfortbridge in County Westmeath and just about everyone will try a verse or two. It has to be one of the most popular of Irish Balads on emigration and a visit to youtube is sure to bring up a copy or two. She emigrated to America in September 1895 where she married Richard Brayton a French-Canadian and became well know in Irish American circles for her poems and contributions. She returned to Ireland a number of times and was acquainted with many of the leading political figures of the times. She returned permanently in 1932 and spent the last years of her life in Kilbrook
where she died on the 19th of August in 1943. She is buried in Cloncurry graveyard. The above detailed information is from the intro to the book and it is one worth adding to your collection. I can remember passing the sign for the road and intending to visit. Must get back sometime! This book is compiled by Bernadette Gilligan with an introduction by Olive Morrin and is published by Nass Printing Ltd. Tel: 045 872092. Nass Printing Ltd.. I'm sure they'd be able to tell you how to purchase a copy.
Posted by Frank at 6:14 AM No comments:

Carrie Kelly "The Forest of Life"

Carrie Kelly "The Forest of life"


I recorded this back in June in Navan Library with Jimmy Byrne's "Captor and Verse". Here Carrie Kelly reads her poem "The Forest of Life". Both Jimmy and Carrie are members of The Small Impact Writers Group in the town, though Carrie has dropped into the Writers' Circle in the past.

The Meath Writers' Circle (July) Meeting 2013
Verona Pentony was a guest reader at last night's meeting of the Writers' Circle. A poet and author, her book "Reflections from the Heart" is now available for purchase and more details to be found from link here. Verona Pentony

Also at last night's meeting we had the draw to raise funds for our own intended publication which will hopefully see the light of day later in the year, but never there till its there folks! The winning number in the draw was (14) so if that was the line you picked, contact seller! On the cards where there was a second prize the number was (12). Many thanks to all who purchased lines and greatly appreciated.  A large crowd turned out for last night's event about fifteen in all, so well attended! And before I go, I caught an extract of Sunday Miscellany late on Wednesday night, too early for me on Sunday mornings
. Anyway it was Caroline Carey Finn of the Boyne Writers reading on Laura Ingalls Wilder or something along those lines. That Laura did me out of a dinner once but that's another story!
Posted by Frank at 6:26 AM No comments:

Battle of the Books (Photos)

Battle of the Books (Photos)

Battle of the Books

Congratulations to  Paul, Caroline and Michael. Great stuff guys and to Michael for putting in a great performance at the end. Getting better every year! And to Michael the Sheriff and Sean Reilly many thanks guys! Appreciated! Now to my favourite or perennial topic, the judges!

As to the judges, I'll throw me hat at it if I meet one more judge who tells me he doesn't understand the piece and then proceeds to award marks on that basis. Now I'll have to preface the following by admitting I have some form on this and in my humble opinion some of the judging over the past five years has left a lot to be desired and my contribution last year was "On Matters of Jurisprudence". The year before that I made one or two comments as well, and of course the first year! Now that said, it is not easy being a judge, you get the stuff only a day or so before the event and have to come up to speed fairly fast in order to make what could be considered pertinent comments. Not sure I'd like to do it at all. But the crux of the matter is and I can only speak for myself here, it gets worrying. This year a summary was asked for and provided and it is below....

A satire on Gulliver's Travels and the travails of the good Doctor in the form of a communique between himself and his one time alter ego on some of the difficulties he might encounter on his visit to Trim. Or as they say out here, we've all been there. Under the aegis of a discovery! A cautionary note!
~ ~ ~
And I should have ended on~A few observations on the town and its people~ but I forgot. Now I realize it's a bit of a send up itself and there's probably enough flaws and faults in the above and in the piece itself to deduct marks all over the place but at least the above should have provided a few pointers on how to get an insight into the piece, but nothing outlined was commented on at all and this is what it turns on.  As I said at the beginning to award points on something you haven't grasped or fully comprehended and to pluck figures out of the air is to do everyone a disservice and reduces the event to a parish amusement. It needs to be said, the present method of judging this contest should have been changed after the first year and with one or two notable exceptions, and they mostly have not been local, and allowing for the difficulties involved, the judging has been poor and hardly competent. A much better solution would be to give them the pieces a week in advance but sure I still wouldn't be happy. Nuff said!
Posted by Frank at 6:30 PM No comments:


And so to the above! Our scouts have informed us that rehearsals went well for the "Others" and their numbers keep improving by the day. Reduced to agricultural terms and implements they are bound to put up a good show. Bodyline tactics and all! We can only endure. If the weather turns anything is possible and plans are afoot to introduce the odd persuader in the form of an "introductory note" and if that doesn't work offer up the novena. My own introductory note was that good I almost swapped it for the original and ended up so confused I couldn't understand either! Swift himself offered to come along and translate but in the interest of fair play I had to decline. Gentlemen that we are! There is no use tipping the thing completely in our favour, people have paid good money to be entertained! Word of mouth was such that there was no need to advertise,.build it and they will come so to speak. Rumour has it the opposition is going to attack down the flanks, send the judges in first. We will have to counter with the mob, they're expendable anyway. No telling how it will turn out. I've informed the "boys" not to eat or drink anything especially the "Crackers". Dry Mouth syndrome and you could end up "satired" out. The sun is coming up , must go!
Posted by Frank at 4:03 PM 2 comments: