Carmel Murray who has only recently joined The Meath Writers' Circle, here reads a poem that is dedicated to her parents. Carmel has been writing poetry for a number of years and is a member of a number of committees around the Meath area.
Posted by Frank at 3:21 PM 2 comments: Links to this post

Ok since it was Bob Dylan's birthday last week and this is the song I went looking for, here's a really nice version and if you want to learn to play it on the guitar, this is for you! With thanks to "alouette87" who posted it and to youtube for sharing! I picked this version from the covers because I thought it sounded the best.
Posted by Frank at 2:39 PM No comments: Links to this post

On a week that was Bob Dylan's birthday I went looking for "Song to Woody" and found only covers, which brought me to Woody Guthrie and to Andy Irvine and "The Ballad of Tom Joad" which led on to the above. Now if you haven't heard this you are in for a treat, and in a week of "Pronouncements" from those who would have you live on their lunch money, I suppose nothing much changes! This is a great ballad from Bruce Springsteen and the original version was as good as it gets and well worth looking up and having a listen to, but the above? There are those who would tell you that Tom Morello is the greatest rock guitarist of them all and hard to argue with that!

With thanks to "Darulezz" who posted it and "Youtube".
Posted by Frank at 3:49 PM 4 comments: Links to this post

Labels: The Ghost of Tom Joad

Willie G. Hodgins has been a member of The Meath Writers' Circle for about the last ten years or so and this is his fourth video to be uploaded here. The others being, My School Days, Changing Seasons and What Matters Most. A native of Bohermeen he published a book of poems a while back (Sunflower) which was launched in Navan Library by Tom French and dedicated to his Daughter Lucy, as is the poem above, hopefully he is working on a second collection.
Posted by Frank at 2:48 PM 2 comments: Links to this post

A man who surely needs no introduction Tommy Murray is both Chairman and founder member of The Meath Writers' Circle, a writers group he set up back in the early nineties with Minister Noel Dempsey and Deirdre McGivern of The Meath VEC. A winner of numerous awards for both poetry and prose he also has a number of books on local history to his credit and one on the haunts and hauntings of the surrounding countryside that is due out sometime later this year. Much more detail over on "The Meath Books; Website" if you click on the link opposite. His book of poems "Counting Stained Glass Windows" was published by Lapwing of Belfast and he runs a children's creative writing course every Saturday morning in Navan Library.
Posted by Frank at 6:03 AM 3 comments: Links to this post 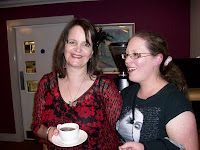 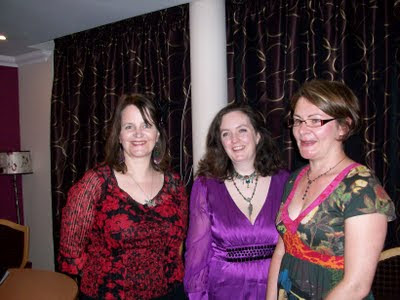 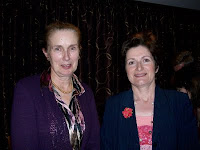 The Poetry Divas made up of Kate Dempsey, Maeve O' Sullivan and Triona Walsh were the guest readers at The Coffee Shop Knightsbridge Village in Trim last night and were taking no prisoners, male ones anyway! They opened with a poem about breasts just to bounce things off and leaving nothing to the imagination moved on to small children and recipes and bush babies and domestic bliss of one form or the other and wishful thinking! (Life Under The Lens). Ancient Irish Myths with Debusy creeping in somewhere, and a spinning bottle (Wine), arms that crush, and all in all it was a storm topped off with domestic dilemmas discussed! Michael Farry read two pieces from the Battle of the Books and Orla Fay read "Going to Portmarnock" which was published in the last issue of "Riposte". Other contributors included members of The Boyne Writers and The Cavan Lit Lab and if I could read my own writing I would give them a mention but the sun is shining and I'm heading outside. Caroline Finn's poem sounded very interesting! Anyway the "Poetry Divas", if you get the chance to hear them performing "Go See!"
Photo: The Poetry Divas,/ Kate Dempsey, Orla Fay,/ Caroline Finn and Barbars Flood.
Posted by Frank at 6:42 AM No comments: Links to this post

Paul has been a member of The Meath Writers' Circle for a good number of years and this is his fourth video to be uploaded here. Others include "No Redemption Here, The Literary Assassin, and Solace" and if you scroll back a bit, well worth a listen! His poetry can also be found over on the "writing4all" website and he touches more than a little on the things that really matter. So what's the rush, give a listen!
Posted by Frank at 5:03 AM 2 comments: Links to this post 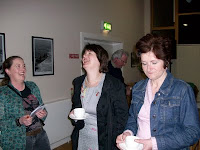 The above mentioned are the guest readers at The Coffee Shop Knightsbridge Village this coming Thursday, or at least four of them are. The Poetry Divas are made up of Kate Dempsey, Maeve O' Sullivan, Triona Walsh, Barbara Smith and Niamh Bagnell and they have read everywhere! Places that take a long time to get into and have long avenues both in and out. Anyway this should be exciting, Kate Dempsey was a guest reader in the past and since then has picked up the Plough Prize for poetry. The start time as usual is 8pm and tea and biscuits will be served. €5 Euro to get in and not to be missed! Off into the files for a photo!
Photo: Orla Fay, Kate Dempsey, Caroline Finn.
Posted by Frank at 3:38 PM No comments: Links to this post

One of the best ballad writers you're likely to come across, Jimmy Peppard here  reads "The Haunts Of The Heron", no doubt written about a stretch of the river Boyne or one of its many tributaries. This is his third video to be included here and if you scroll back a bit  you can hear "The First Day Of July" about the battle of the Somme  and of course "The River Boyne". Well worth a listen to them all!
Posted by Frank at 5:36 AM 2 comments: Links to this post 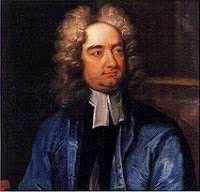 The Boyne Writers' Group in conjunction with The Trim Swift Festival are holding a poetry or prose competition in commemoration of Jonathan Swift, the closing date for which is fast approaching, (Tuesday, 7th June, 2011) The theme of this year's competition is "Travels Into Several Remote Nations Of The World: Ireland 2011" and the full details of the competition can be had by clicking on the link to the Boyne Writers over on the right. The festival itself runs from Thursday the 30th June to Sunday the 3rd July in Trim County Meath and more information can be had at http://www.trimswiftfestival.com/ . So still time to get the pen out and get writing. The entry fee is €7 Euro per item and the prose length is between 600 and 800 words, poetry 30 lines to 100 lines. Entries should be sent to Boyne Writers' Group, c/o Paddy Smith , 25 Saintjohns, Trim Co. Meath, Ireland or emailed to swift@boynewriters.com but check for the full details on the Boyne Writers website. And good luck!
Photo: Jonathan Swift/Google Images.
Posted by Frank at 2:24 AM No comments: Links to this post

I first came across this on the BBC cassette "Bringing It All Back Home" a good number of years ago and is the story of a bundle of letters found by Peter Jones which were sent to his great grandfather by his father in Ireland. They were letters of family news, births, deaths, sales of lands, bad harvests, marriages, and maybe most of all, enquiring if he would be coming back home The last letter informs him that his father whom he has not seen for 30 years has died. Peter Jones used these letters to make a song called "Kilkelly" and on the BBC cassette the credits go to Mick Moloney, Jimmy Keane, and Robbie O' Connell. The info on the sleeve notes of the cassette was the source of the above, so with thanks. There are many fine versions of this song over on youtube, and while Michael recites it here, maybe we can tempt him into singing it at a future date.
Posted by Frank at 3:38 PM No comments: Links to this post

Sean Reilly is a member of both The Meath Writers' Circle and The Small Impact Writers' Group in Navan. Known for both his singing and his writing and equally at home at either of the two, here he reads a wonderful piece of prose and one that is intended for a calendar being produced by the Navan group. More info on this to come!
Posted by Frank at 5:47 AM 4 comments: Links to this post

The Meath Writers' Circle held their monthly gathering at The Castle Hotel in Trim last night with a good number attending and I took the opportunity to run off a few videos. There are all variety of poems and pieces of prose here and some are very good indeed, and hopefully I'll get to post them over the coming weeks. This one is from Pat Bennett who hasn't been up before and I think you'll agree is well worth a listen.  Pat has been a member of  The Writers' Circle for the past couple of years and his poems are always lyrical and easy on the ear.  A touch of magic even.
Posted by Frank at 6:16 AM 3 comments: Links to this post

I've had a copy of this for the past week or so and after reading straight through returned to dipping in and out as the mood dictated. Or something like that. Anyway it is a collection of very interesting pieces both poetry and prose and you always want to know more, though  poetry is not an answering service. It is well worth while getting your hands on a copy of this and it won't do your shelves any harm. Some of the poems and prose deserve more than one reading, or even two! Launched by Noel Dempsey at the Castle Arch Hotel in Trim on Thursday the 31st of March and available for sale in Antonia's of Trim, or in other outlets, details of which are available on The Boyne Writers Website. (Just click on the link opposite). It can be purchased for the modest sum of €8 Euro and one for the collection.

Posted by Frank at 6:14 AM No comments: Links to this post