Phil Coulter - The Man from God Knows Where


The 1798 Rebellion was an uprising by The United Irishmen against British rule in Ireland and lasted between May and September of that year resulting in the death of thousands. Last week marked the 220th anniversary of the event; passing almost unnoticed in the media, but many of our finest ballads can be traced back to then. The above recording is by Phil Coulter and tells the story of one Thomas Russell who played a major part in both it and a later uprising by his friend Robert Emmett. He was also a close personal friend of Wolfe Tone. Thomas Russell was executed in Downpatrick in October 1803. The ballad is by Florence Wilson. (1870 - 1946). With thanks to Ireland 1 who posted and youtube.
Posted by Frank at 3:53 AM No comments:

I Found My Tribe/Doris Daley.

I Found My Tribe/Doris Daley!


"I Found My Tribe" is the story of a journey back. A DVD by Denise Calderwood that explores the question "What is in you to do, and how did it get there?" and follows in the steps of the Canadian cowboy poet Doris Daley as she searches for some trace of her roots and of her great grandfather Jim, who left Ireland in the nineteenth century and settled in the Porcupine Hills of South Alberta. A journey that would take her through Canada, the United States and to Ireland. A saga of emigration and famine ships and of musical heritage. The Ó Dálaigh were some of Ireland's greatest Gaelic poets and our last magazine included a namesake of hers and his poem on Bective Abbey. Her poems on the American west have been compared to those of Robert Service and she credits his influence to when she discovered the magic of cadence and internal rhyme. The vast open spaces of the American West to the grasslands of Meath is a distance but she taps into it easy and her Irish poems bridge that journey made. There are many well known faces here and you really should get yourself a copy; especially if you are from the county.

She was the guest reader at both The Central/Navan and The Scurlogstown Olympiad Haymaking Festival in 2013 and scenes from these and other events both local and national are included here.

Doris Daley is an award winning poet whose poetry has won her the Best Cowgirl Poet awards from both the Academy of Western Artists and the Western Music Association, as well as the Texas Cowboy Gathering's Heritage Award. Her poetry books and other info are on the link below.

www.dorisdaley.com
Posted by Frank at 7:12 AM No comments:

Pat Bennett was a poet and songwriter from Virginia in County Cavan and a long time member of The Meath Writers' Circle. Sadly, he passed away in April of this year and was buried in Maghera yesterday. He will be remembered for his kindness and good nature and always a ready smile. I recorded Pat reciting this poem back in April of 2012 and there are a number of his other poems on the site back then. He was a regular at nearly all of our meetings and used to travel over from London every month. He will be missed.

Painted Skies
A bite to eat
A place to lie
A time for thought
Before I die.

My love to call
A kiss at last
A hand to shake
That's from the past.

A dyin wish
In a livin year
Come the appointed time
Of leavin here.

Thrones of mercy
I can see
Harp of angels
Callin me.

Up among
The painted skies
Of one who lives
And never dies.


One of the great American songwriters, Billy Joel celebrated his birthday this week. (Yesterday!) and while he didn't include this track in a list of his favourite five recordings it is perhaps one of the finest anti-war songs out there and a tribute to all who died in the conflict. And would be my go to...
With thanks to youtube. From "Official Video" site.
Posted by Frank at 1:34 PM No comments: 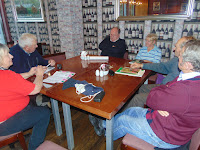 Only a small number turned out for our meeting last Thursday night with the focus on getting material in for our yearly magazine, though other items were also discussed. The highlight of the night though was the short story reading by Peter Farrelly on our ability to communicate through speech and the part played by our canine friends and all told perhaps in the context a chance encounter. And happy outcome. One of the best I've heard. I remember Orla O' Driscoll reading one many years ago in Dunshaughlin and a guest reader of The Boyne Writers in the Knightsbridge and one or two in Boyne Berries and Willie Hodgins has one locked away somewhere but that's about it for outstanding. But allow for that I don't read many short stories. The "Shawshank Redemption" I remember and "Stand By Me" and they were by Stephen King and both made into films after. Now I must go.
Posted by Frank at 4:43 AM No comments:

John F. Deane was the guest reader on Tuesday night for an evening that was both entertaining and informative. A blending or coming together of both poetry and faith or where one becomes a vehicle of the other and all with some humorous aside; whether that be a greeting or an encounter along the road and I don't know the Irish word for tar nor anything of hide and seek among leaves or song of songs, or much of the many other insights but he also touched on old schoolbook favourites, whether it was the writings of Wordsworth or W. H. Auden reflecting on Yeats. And everything you do in the world. He was the founder of Poetry Ireland and is the recipient of the O' Shaughnessy Award for Irish Poetry and the Marten Toonder Award for Literature and is a member of Aosdána. He was the founder and editor of The Dedalus Press and is the recipient of many international awards. The list goes on. He also reflected on the writings of his friends Thomas Kinsella and Seamus Heaney.