According to the Evening Herald about five thousand people turned out on Tara on Easter Monday to hear a reading of the Proclamation, thus carrying out the wish of Pádraig Pearse who said that for historical reasons Tara was all important and he wanted the Proclamation read there. The readings were carried out by Ann Finnegan, the President of Comhaltas Ceoltóiri Éireann and Donal O Hannigan, a grandson of the man who received the order from Pearse in 1916. The event was organized by Pat Farrelly of the Scurlogstown Olympiad Group, Paddy Pryle of Navan and the Aeríocht Committee and was probably the largest gathering on Tara since 1948 when Taoiseach John A. Costello, President Sean T. O' Ceallaigh and Eamon de Valera were there for the commemoration of 1798 and marks another historic day for the hill. Donal Ó Hannigan the Commander of the Louth/Meath forces for the 1916 Rising, was ordered by Pearse to mobilize all Volunteers on the Hill on Easter Sunday at 7 pm and read the Proclamation, and Volunteer companies of Carnaross and Drumbaragh, Kells arrived on the Hill on Easter Sunday night 1916 but there was no-one there from Louth or the rest of Meath and they were sent home by Sean Boylan. O' Hannigan and the Louth men did arrive later that week and went on to join the Dunboyne men at Tyrrelstown House at Blanchardstown. The above information was sourced from a publication by Noel French of The Meath Heritage Centre called, "Tara,1916-2016" and worthwhile getting your hands on a copy.

The Aeríocht included other events such as Irish music and dance, a teach gaelic and a demonstration of gaelic games' skills. There were historic talks and an exhibition of artifacts of the  period. Members of The Meath Writers' Circle who read there included myself, Verona Pentony, Carmel Murray, James Linnane and Eugene and Sean Kane.

The Meath Writers' Circle and Boyne Writers were in Longwood, County Meath, last Sunday at one of the many events to mark the centenary of the 1916 Rising. Longwood must be one of the few villages left that can boast of a village green and although the day was a little wild there were more than a few interesting people around. Cynthia Simonet above read a very interesting piece on Maude Gonne with regard to evictions and such and indeed in the past hundred years or so since it was written not much has changed. Her husband dressed as Napoleon from an earlier revolutionary period while Carmel is holding a copy of our recent publication. Members of Trim Junior Comhaltas also played and there were a number of songs and recitations from different people, and a Silver Band played while in the village hall a magician kept the children entertained and he was good! On to Tara!

The launch of the above will take place next Thursday night in the Castle Arch Hotel, Trim County Meath at 8pm. A centenary issue to mark the events of the Rising, one hundred years ago this Easter, it will include both poetry and prose and for those who cannot make the launch or may be in distant lands and want a copy, the opportunity to purchase is available on their website, "Boyne Berries". Link to the right!

As part of events to mark the centenary of the 1916 Rising, The Meath Writers' Circle will be in Longwood this Sunday at 2 pm on the Green and on Tara the following day, Easter Monday at 5 pm. Longwood marks the contributions made by Thomas Allen and Eamon Duggan and the parade through the village will be led by The Philadelphia Police and Fire Pipe and Drums. This will be followed by the unveiling of a plaque to Eamonn Duggan who was the Minister For Home Affairs in the first post-treaty government.

The events on Tara are organized under the auspices of Comhaltas Ceoltóiri Éireann and will include the reading of the Proclamation, thus carrying out the wishes of Pádraig Pearse, The President of the Provisional Government of Ireland,  in 1916. Other events on the day will include a demonstration of Gaelic games' skills, Irish music and dance, historic talks and an exhibition of artifacts of the period. There are many other events also on over the weekend, including Ashbourne, so sure to be something of interest. 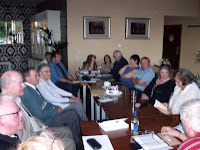 Myra Lalor who was a member of The Meath Writers' Circle for a good number of years and joined back when the late Tommy Murray was chairman, sadly passed away this week and was buried in Dunsany today. Myra was a fine poet and unbeknownst to the group also a fine artist and painter. It was at her suggestion that a book to mark the centenary of the 1916 Rising was published and hopefully in the future some or all of her poems will be published for everyone to enjoy. She was a regular at every meeting and up until she took ill before Christmas her observations and the quality of her writing contributed greatly to each and every occasion. The Meath Writers' Circle would like to extend their condolences to all of her family. She will be missed. May she rest in peace.

An outstanding piece of street-theatre on the day was the contribution by Annette Barry who roundly abused and castigated the Volunteers as they marched through the streets and was representative of the views and opinions of the Dublin populace immediately following the Rising. Of note was the singing of Naoise Barry for her rendition of, "Willie McBride-The Green Fields of France" and Caoimhe, Cadhla and Saoirse who sang, "Molly Malone" before the reviewing stand on Market Square and not forgetting the junior and senior members of Trim Comhaltas who played music from the beginning to the end of the parade. Ray Butler MC'd an occasion that marked not only our National Day but also the events of one hundred years ago this Easter and that hopefully entertained both dignitaries and public alike.


Verona Pentony, secretary of The Meath Writers' Circle reflects on what influences or inspires her. Her poem, "A Single Black Cross" in memory of Commandant Michael Mallin, who was executed for his part in the 1916 Rising is included in their recent anthology, "Centenary in Poetry and Prose". This was launched in The Trim Castle Hotel on Thursday the 3rd of March.

www.veronapentony.com
Posted by Frank at 7:51 AM No comments:


Edel Gillick of The Navan Creative Writers Group held a special event to mark International Women's Day in Navan Library on Monday last. A Celebration of Women  included music, poetry, photography and an arts and crafts expose! The speakers were local poet, Peggy Murphy, "Creative Writing-A Life Long Passion", Deirdre Murphy of the Meath Women's Refuge, "We Are There to Help", and Cllr. Sinead Burke, " Can Modern Women Have It All". There was also some fine singing from John Doyle and Sean Reilly with opening and closing remarks from Edel herself.


As promised here's Noel presenting Irish Culture in Song and Story. With thanks to Noel for the above and his performance at the launch of The Meath Writers' Circle, "Centenary in Poetry and Prose". Thanks Noel! Check out his websites below.

Book Launch/Centenary in Poetry and Prose.

Book Launch/Centenary in Poetry and Prose.

Two of the special guests at the launch of The Meath Writers' Circle, "Centenary in Poetry and Prose" were Una Ó Callanáin, granddaughter of Michael Mallin, the second in command of The Irish Citizen Army and the Commandant at St. Stephen's Green throughout the Rising. She is also the niece of Fr. Joseph Mallin one of the last surviving children of the Rising and now resident in Hong Kong. I believe the Irish Government is to honour him in the next few weeks. The other special guest was Noel O' Grady, noted for his singing in Gaelic and a five times winner of Oireachtas Na Gaelge. He has performed all over the world and his videos and songs are easily accessed on the web. But more on that to follow. A special word of thanks to Joe Kavanagh who kept the musical show on the road and also to Sean Reilly and John Doyle for their fine singing. The guest readers were poets Michael Farry, Edel Gillick and Tom French, who was especially entertaining with his reading and which was one of the highlights of the night, also noting the contribution by Monica Sherlock who is still writing and in her nineties. Finally a word of thanks to Pat Farrelly of The Scurlogstown Olympiad Group who launched the book for us and to Ann Meldon Hugh, Noel French and to Willie Hodgins, Verona Pentony, Eugene Kane and the other members of The Meath Writers' Circle for making the night the success that it was. Not forgetting the staff and management of Trim Castle Hotel and to everyone who came, a big thank you.