The last poetry broadsheet from Riposte has dropped through the letterbox (about a week ago) and sad to say it has ceased publication. Having survived for twenty years without support or financial assistance from any institution or other body it managed to feature two hundred and forty seven poets from eleven countries through one hundred and ninety issues and quite a feat. It gives an honourable mention to Joe Duffy of Liveline whose program featured a number of its poets back in 2012 but also mentions the ones that didn't and you can only wonder. Many of Ireland's best known poets contributed poems here and many had their first poems published in Riposte. It will be missed.

Poem For The Ploughing/ Results

POEM FOR THE PLOUGHING

‘Bulbs’ a poem by Tipperary born teacher, Paddy Moran, voted as the favourite poem of the farming community with ‘The Farmer’ close second by Verona Pentony, Head of Training QSHE Momentum Support Group UK & Ireland at the Ploughing Championships in Ratheniska, Co Laois ahead of works by both Patrick Kavanagh and Seamus Heaney. Verona is a published Poet, Reflections from the Heart and Reflections of Time. She is secretary of the Meath Writers’ Circle with an open door policy during meetings the first Thursday of each month in Trim Castle commencing 7.30 pm.
For several months’ people from all over the country had been invited to enter their favourite work of poetry about ploughing and the land into a competition organised by Kildare and Leighlin Diocese. Over a thousand entries were submitted and these were short listed before the Ploughing Championships. The six most nominated poems were placed on display at the Kildare & Leighlin Diocesan Stand where visitors were asked to vote for their favourite. Over three thousand people cast their votes over the three days of the Championships.
Bishop Denis Nulty announced the winner at 2:30 on the 24th September 2015. He said ‘I am bowled over at the response to this competition and by the amount of entries received. I am surprised that a living poet was the people’s favourite and the runner up was also a living poet, the only woman in the competition, Verona Pentony from Co Dublin whose poem, The Farmer, came a very close second.’
Verona Pentony, daughter of the late Paddy Pentony, Swords and Ballyboughal Co Dublin, a farm machinery Importer ‘P A Pentony’, A farmer, breeder of Simmental and Charlet Cattle. Her mother Betty now retired living in Applewood Swords.
The other poems short listed were Digging and The Follower by Seamus Heaney; I will go with my Father a Ploughing by Joseph Campbell and The Man after the Harrow by Patrick Kavanagh.
Verona said, “I am honoured and feel a deep gratitude for receiving such recognition. I am very thankful to the people worldwide and from all counties of Ireland especially Ballyboughal, Fingal who nominated The Farmer. ‘The Farmer was inspired through my background in Farming in Ballyboughal and Nichols Cross in Cloone Leitrim. Verona expressed thanks to Sean O Grady, The Ward, St Margaret’s, recently 85 and still passionate about farming to this day. Inspiring Verona through many conversations on farming, health & safety and politics. Sean is a man who leads by example through his faith and commitment to Marriage.

The lonely wood pigeon perched, echoes, sounds of joy – ‘the morning has risen’. The farmer stirs from a deep slumber as a beam of sunshine escapes through the curtain, reaching his furrowed, leathered, weather-beaten brow. He places one foot on the wooden floor, his lips part as the second foot completes the pair. Whispering, “Thank you;” he feels a deep gratitude for having awakened to this new day. He scratches his head in anxiety, with a hand that has worked the farm, wondering if the area aid from the EU will keep him afloat. He understands his maker has determined this day, yet the weather elements will dictate the farmer’s way.
He glimpses through the window to see what is yet to come and sights a congregation of birds on the electricity cables above - a sure sign of rain on the way!
In the kitchen, he listens for a weather update. Warming himself near the Aga cooker while making a brew. He looks to the Sacred Heart picture and the hanging family rosary beads. To understand the farmer, one must understand the traditions of the land. The land has a holden-fist on the heart of the farmer, as many farmers well know. It has caused bitterness and disputes in generations past. The farmer must feel a love for the land and a passion for what he does best. The land holds high expectations and demands dedication from him.
From the first leaves falling in autumn, to the nurturing of crops through understanding of spraying techniques. In winter, hearing the cows crave for hay, and repairing machines during the low times. Springtime brings cattle and sheep grazing pastures new; and seagulls landing on freshly ploughed fields. Grass whirling in the wind, then corn ears blowing side by side. The warm glow of the valley in summer brings the harvesting of ripe golden corn. Haymaking sees farm picnics, ready made tea in old lemonade bottles, poured into mugs and stirred by straw, with the smell too of homemade bread and curney cake. The farmer, seeing birds migrate in a ‘V’ pattern, feels an anxiety for the year-end accounts yet to come. Feathers are scattered outside the chicken coup - the fox has been and gone!
The farmer leaves the doorway in silence and walks out to the fields to assess his crop. The early morning dew dampening the ends of his trousers as he walks. A slight smile parts his lips as he listens to insects galore. He bends down and reaches with a strong, hard-skinned, glove less hand, grasping his crop and pulling from the root. He sees what he needs to know. In that moment he is complete; he is a Farmer! He turns and strokes his dog, which had been lagging behind.
He understands his fate. One day he will leave the land behind – he will be gone, but the land will remain forever!

Here's a beautiful one though I may have posted before. With thanks to Merhlins Place who loaded and youtube.
Posted by Frank at 6:34 AM No comments:

Poem for The Ploughing!

Poem for The Ploughing!!

The 84th National Ploughing Championships are in Ratheniska, Stradbally Co. Laois between the dates 22nd to 24th of September and the top six poems for the "Poem for the Ploughing" have been announced and include Verona Pentony for her entry "The Farmer". I should hasten to add that she is the only female and indeed the only living poet to make the shortlist, the others being some of Ireland's better known writers so congratulations to Verona on that. The poems will be on display in the Kildare & Leighlin tent (R 26 - 444) at the Championships and visitors will have the chance to vote for their favourite. Verona will be reading her poem at 3pm on the 23rd and looks forward to saying hello. So if you're visiting or know someone who is why not drop in and giver her a vote. The peoples' choice of "Poem for the Ploughing" will be announced at 2.30pm on the final day of the championships. And the shortlist!! The top six poems are --

I Will Go With My Father A-Ploughing by Joseph Cambell
Digging by Seamus Heany
The Follower by Seamus Heaney
To the Man after the Harrow by Patrick Kavanagh
Bulbs by Patrick Moran
The Farmer by Verona Pentony.

If you scroll down the page you can listen to Verona read her poem and a video as well. Also on youtube. Best of luck Verona! Visit at Here .

There's quite a bit of history to this one and worth looking up and given the refugees pouring into Europe at the moment perhaps pertinent in some way, though, I believe it's about the French resistance in the second world war. Another good poem from Leonard! With thanks to youtube and the person who posted.
Posted by Frank at 4:07 AM No comments:

The closing date for this one is the 5th of November so plenty of time to get your entries in. A number of local writers have featured here going back to Tommy Murray and some the Boyne Writers have picked up awards as well, including winning it outright a number of years back. The first prize is the Ledwidge plaque inscribed with the winner's name and a cash prize as well. Cash prizes and books for second and third places with merit certificates for all finalists. The certificates are always beautifully done and well worth having. The first three poems will be entered in the Forward Prize UK and in addition the winner will be invited to read at the annual Francis Ledwidge Commemoration at the National War Memorial Gardens in July 2016.

The poems must be the competitor's own work and not previously published or broadcast and must not exceed 40 lines of type with a max of six poems entered. The entry fess are €4 per poem or three for €10 and six will cost you €20. Put your name and address on a separate sheet and send your entries to:

S.A.E. or E-mail address for winners' list, and poems will not be returned. Winners will be notified and results announced at the annual awards night. Info at 085 849 7531. Facebook page: Inchicore Ledwidge Society.
Posted by Frank at 5:51 AM No comments: 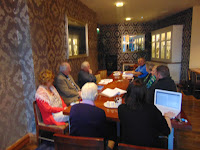 The monthly meeting on last Thursday night covered a multitude of different things with some fine poems and stories read but mostly concerned the material for the magazine due out around Christmas. If you haven't sent something in then it's needed by the next meeting at the beginning of October. The material for the book on 1916 has been gathered and it's just a question of putting it all together and getting it to the printers. Many thanks to everyone who submitted a poem or an article and hopefully it all comes together in time. Should be interesting! I believe Edel Gillick of the Navan Writers Group has something planned in the near future but awaiting more details. Keep writing!
Posted by Frank at 11:27 AM No comments:

The Farmer by Verona Pentony (Poem for the Ploughing)

Verona Pentony is a member of The Meath Writers' Circle and for this poem to win The Poem for the Ploughing Championship send an e-mail to poemfortheploughing@kandle.ie.
Posted by Frank at 7:14 AM No comments:

One of the many events last Sunday to mark Heritage Week was in Scurlogstown, Co. Meath where musicians, poets  and especially children gathered in the local heritage park for an enjoyable day out. The park itself is located close to Jack Quinn's famous public house, so those who were so inclined could drift across to watch the encounter between Dublin and Mayo in the All Ireland Semi Final. A game which ended in a draw and is to be replayed this Saturday. Also on last Sunday was the gathering in Tara but having to choose opted for the game instead. There seems to be no shortage of events to mark Heritage week these days and all to the good as very little of it seems to be taught in the schools anymore, but maybe I'm mistaken and will pass on that. Anyway mostly not a topic for conversation and the preserve of the few. Tara itself is still not a world heritage site and you can only wonder why.