Eileen Kavanagh is a new member of The Meath Writers' Circle and here she reads of her experience of moving to the country, or maybe it's a story. Anyway the encounters that we all take for granted or that pass for some semblance of normality beyond the confines of the Dublin postal codes get a mention here. Which reminds me, we had a bus service once. It went to Dublin in the morning and returned in the evening, until they tried it the other way around, empty. Such is life! Give Eileen a listen!
Posted by Frank at 3:12 PM No comments: 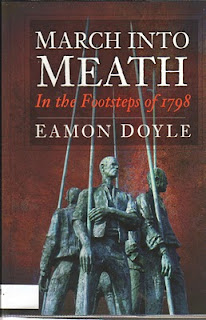 Most of the stories about "Croppy" graves and their locations have now been lost or forgotten, but not that long ago people around the  Tara area would point to the woods and remark on that "Croppies" had been buried there. It wasn't taught in the schools but Eamon Doyle's account of the Wexford men who marched into Meath in the summer of '98 is one for the shelves. The Battle of Tara itself was done and dusted by that stage having taken place on the 26th of May, though a second engagement is mentioned in John Donohoe's book "The Killeen Castle Story" for a couple of months later, and both make for interesting reading. The last of the Wexford army  that crossed into Wicklow made an ill-fated decision at Whelp Rock that would cost them, or many of them their lives, and it is hard to see the reasoning behind it. Out in the plains of Meath and Kildare the pikemen would be cut down by cavalry or canon and any natural advantage they had would be lost.
Credited with marching more than 500 miles until their final disbandment at Ballyboughill three weeks later the logistics of the operation was in itself a feat. The line of march would take them through south Meath to Garristown before turning for Slane and Rathkenny and their defeat at Knightstown bog, returning to Ballyboughill. Once they broke up as a fighting unit they were at the mercy of their opponents and their wasn't much of that. What makes this book especially interesting is in the oral accounts handed down and the inclusion of correspondence from the state archives as well as other lists with regards to medical reports. If you are interested in the history of Meath and the last fighting division of the Wexford men in the summer of '98 then this is one for your shelves. Published by The History Press Ireland.
Posted by Frank at 3:52 PM 2 comments:

A man who surely needs no introduction Tommy Murray is the winner of numerous awards for both his poetry and short stories. Counting Stained Glass Windows was published by Lapwing of Belfast in the not too distant past and there are many others on the local history of the area that are worth getting a copy of, most notably the publications by Nonsuch. This is his fifth video to be uploaded here the others being "Ode To A Bottle Of Wine, Lottery, Stone Walls and The River". This poem was published by ~Riposte~ a few years back and the videos you can watch if you scroll a bit further back or just Google! The word on the grapevine is that he's picked up another award down south! Click on the link to Meath Books for further details!
Posted by Frank at 2:25 PM No comments:

Eoin Holmes the cathaoirleach of Meath County Council was on hand to do the honours at the launch of John Donohoe's book The Story of Killeen on Friday night. The last "open" event to be held at the Castle before the start of the Solheim Cup it drew a large attendance and many for whom the game of golf is a good walk spoiled got to enjoy the ambiance and the openness of the surroundings for the last time. Killeen was never a walled in estate, as I think was mentioned during the speeches but it is now one that is no longer visible from the road and unless you are one of those who like to swing through with a golf club the road from Dunshaughin to Dunsany is all the poorer.
The book though is a splendid production and touches lightly on the history of what it describes as a special place, From the coming of the Normans to the present day Killeen and its sister castle at Dunsany have been central to much of what makes up the history of Meath or indeed Ireland. Retailing at €10 Euro the book is sure to become a collector's item, and for many of those attending the Solheim Cup a souvenir of more than just a round of golf.
www.labour.ie/eoinholmes/
Posted by Frank at 7:08 AM No comments:

"Memories of Other Days" 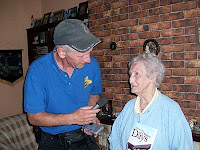 Daire Nelson of L.M.F.M. was out to record another four excerpts from Peggy's book which will be broadcast  next week on his mid-morning show from Monday the 19th to Friday the 23rd of September at approx 12.15pm each day. The book can now be purchased in Kilmessan, Trim, Dunshaughlin, Navan and not forgetting Dunsany, and of course from the author herself! Retailing at €10 Euro.
Outlets:
Kilmessan:
Mia's Post Office
Centra Superstore.
Dunsany:
Malachy's Post Office
Dunshaughlin:
The Pastoral Centre.
Supervalu.
Tara News.
Jonesy's Fruit and Veg.
Trim:
The Post Office
The Ramparts Coffee Shop
Antonia's Book Store.
Navan:
Hartens Newsagent/Shopping Centre
Navan Bookshop/Kennedy Road.


. Mark has been a member of The Meath Writers' Circle for a good number of years and this is his third video to be uploaded here, the others being " Low Horizons" and Forensic Housework". Well worth a listen if you scroll a bit further back or just Google for info. I recorded a good number of videos in August and still have one or two to load up, with September to come! Anyway enjoy!
Posted by Frank at 5:09 AM No comments:

"Memories of Other Days" 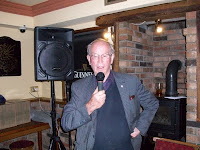 John Donohoe of the Meath Chronicle did MC for the launch of  Peggy Murphy's book of memories and poems on Wednesday night before handing over to Michael Kenny for the launch. Michael is the chairman of the Dunshaughlin and District Historical Society and kept everyone entertained on the night. A man with a store of knowledge on Dunshaughlin and times past he was foremost in the setting up of the Heritage Trail and has contributed to many of the local journals and history compilations. In his role as the Resource Coordinator for the Parish Council he produced the "Jubilee Commemorative Booklet" in 2007 and as the book itself says,"he is much sough after for walks and talks about the history of the area". And still driving in his 1936 Austin 10. 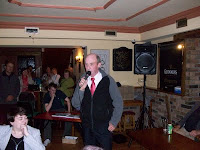 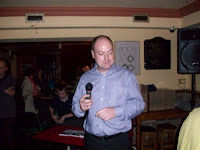 The launch itself was a great success with a large turnout (80-100), tea and sandwiches for all laid on by Fergie himself and Michael Murphy finished off the speeches by thanking everyone who came and telling a few stories in the process. The Book will be in the local shops in the next few days retailing at €10 Euro. Details to follow on this page! 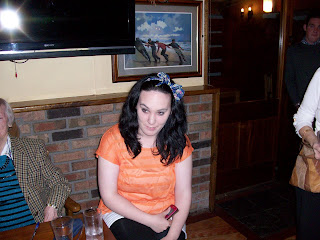 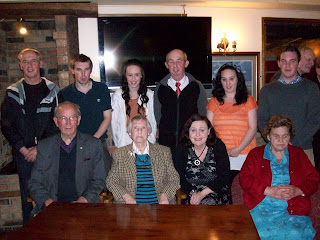 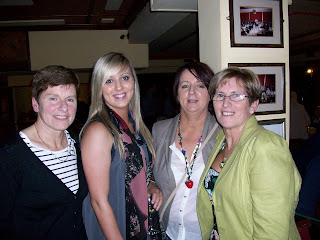 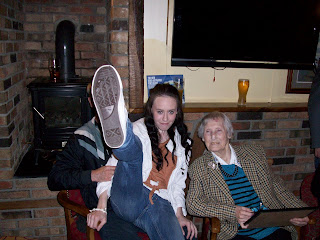 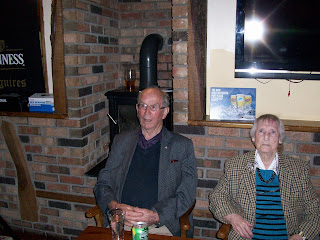 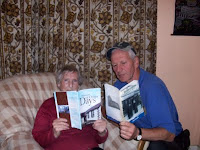 Daire Nelson of L.M.F.M. was out to interview Peggy Murphy about the forthcoming launch of her book "Memories of Other Days" which takes place in Fergie's of Kilmessan tonight, and he also recorded a number of

other items or extracts which will be broadcast at a later date. The interview went out at 12.15pm today and Sinead who coordinated much of it was in touch afterwards to say a mini-disc would be in the post. Much appreciated! Most people who listen to radio probably do so on the old transistor or mains but for those away from home or the younger generation the internet is probably the medium of choice. L.M.F.M. have a very interesting webpage which is worth a look and includes everything from video to playback facilities and items of news, not forgetting live broadcasts.Check it out at www.lmfm.ie/

Photo: Peggy Murphy/Daire Nelson.
Posted by Frank at 5:48 AM No comments:

Phizzfest Poetry Award
﻿﻿﻿ ﻿﻿﻿The Phibsborough Comunity Arts Festival runs from the 8th to the 11th of September 2011 and the winner and runners-up for the poetry award have been notified, and no it wasn't me, though I believe one of my poems has been selected for publication (Distant Parts) in a pamphlet entitled "Poems  from Phizzest" which will be launched during the festival and this includes a small fee! Other journals take note! 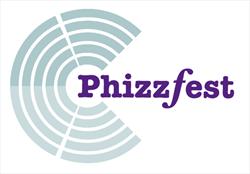 Anyway there will be a poetry reading in the Brian Boru pub, Cross Guns Bridge, Phibsborough Dublin on Saturday the 10th of September from 6.30pm to 8.00pm which will feature two groups as well as the prizewinners and the poems featured. So if you happen to find yourself in the vicinity of Phibsborough on the night the Brian Boru might just be the place to be. Check it out at http://www.phizzfest.ie/
Photos; From Google Images.
Posted by Frank at 2:31 PM No comments:

Memories of Other Days/Book Launch! 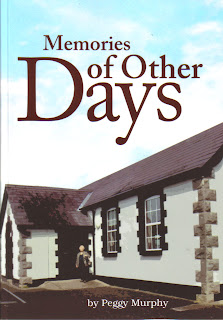 "Memories of Other Days" is a collection of poems, stories and photographs by Peggy Murphy about her schooldays and times spent growing up around her home place on the Derrockstown road Dunshaughlin. It is a selection of memories from the thieties and forties and later times when she moved from Dunshaughlin to Kilmessan. This is the second book Peggy has had published the first being " Dunshaughlin and Other Poems"   in 2004 and one that is still selling!
"Memories of Other Days" will be launched in Fergie's of Kilmessan on Wednesday 7th of September by Michael Kenny of Dunshaughlin and everyone is invited to attend! Refreshments will be served (some). The book retails at €10 Euro on the night and copies will be signed! All are welcome. See you there!
Posted by Frank at 3:48 PM 4 comments: