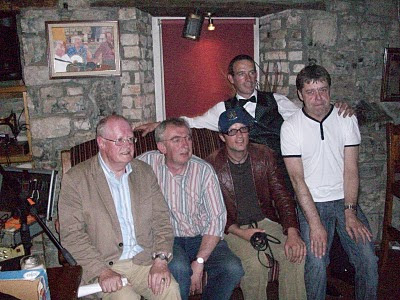 Swift Festival/Stand Up Row.
To commemorate the switching of allegiance by Jonathan Swift from the Whigs to the Tories, or some such thing, Paddy Smith of The Boyne Writers' Group and Trim Swift Festival Committee, devised the Stand Up Row. A series of live debates with the emphasis on live to be held in the pubs of the town in the weeks leading up to the festival itself. This is not for the faint hearted or those who like their material prepared in advance. It is a no holds barred go on the bell, arguing against yourself for the second minute, while debating on a subject drawn from a hat, and all the while competing against another team doing the same thing. If you've watched Gladiator you get the picture, and they didn't have to hack their own arm off. Just a few lions. It will probably be referenced back to the public houses of Trim in the years to come. The winners on the night were Lenihan's of High Street who were competing against Kiely's and they now go into the final against The Steps on Thursday the 1st of July on the opening of the festival. Good luck to both teams!
Photo: Left to right, Paddy Smith, Aidan Murphy, Peter Clancy, Niall Doyle, and publican Thomas Lenihan at the back.
Posted by Frank at 4:46 PM No comments: 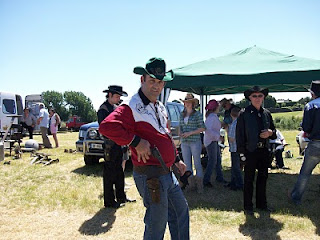 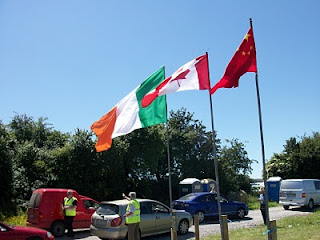 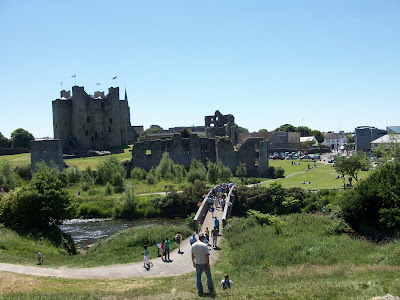 Scurlogstown Olympiad.
With an hour to spare I dropped into the Bardic Hut at the Scurlogstown Olympiad with a few poetry books in the hope that I might sell a few and went for a wander around the grounds.If it's variety you're after then this is the place for you with everything from an anchor to a needle and the entertainment to boot. About two years ago I managed to catch some of the sheaf throwing contest and unless you were there to witness it it is difficult to believe anyone could actually throw something so far into the air. I believe a world record of 62 feet was achieved at last year's festival. Almost not humanly possible! On the way out I was drawn into a quick draw contest, if you'll pardon the pun, where they were using replica colt 45s, with blanks I should hasten to add, and all for charity. So I hope they raised lots of money. Was I fast? Well the code of the west's you don't draw on a stranger! And I'd have liked to try the archery, but had to go. Lucky for some! So next year if you have the time, a great day out!
Photos: Flags, men of the west, and the castle across the river.
Posted by Frank at 1:55 PM No comments:

Rehearsals/The Battle of the Books. 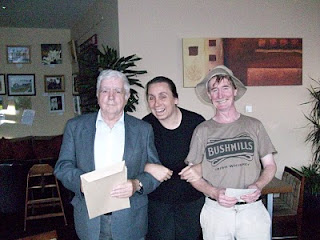 An extraordinary general meeting of The Meath Writers' Circle was held tonight in Trim to discuss upcoming preparations for the above encounter, the selection process not yet being finalised and the tactics and strategies to be employed hanging in abeyance, or was that an abyss? Mote points for discussion were "What would Wellington have done?" or should Pickett have charged on the second day when James was downstream and there was only 173 years between them. Needless to say no agreement was reached. Offers of an early parley were rejected and shouted down to cries of "No quarter!" and the meeting ended on that note. Watch this space!
Photo: Some of those in attendance at tonight's meeting.
Posted by Frank at 1:41 PM 3 comments:

Labels: The Battle of the Books.


Looking over at The American Film Institutes's great films, or in this case great westerns it is difficult to agree with some of the choices made though numbers two three and four are not up for argument. Many of the best films in any genre are remembered for any number of reasons though the ones with great sound-bytes or parting shots tend to stay in the memory. It would be difficult to draw up any list of the above without including John Ford in it, a number of times, and he could have a list all to himself, but I couldn't say I'd list them as favourites. For films with great sweeping landscapes and beautiful cinema photography, and epic themes they are hard to beat, but maybe they run a bit too true, and the west wins out over the character though it's hard to say that about John Wayne. Many of the real interesting films of the west have been made since the spaghetti westerns of the sixties, or at least the ones starring Clint Eastwood, and to revise some of the above, maybe it's the less politically correct character that has made them interesting. Anyway here's the real list, as far as it goes....
(1) High Noon
(2) Shane
(3) The Unforgiven
(4) True Grit
(5) The Long Riders
(6) The Outlaw Josie Wales
(7) Rio Bravo *
(8) The Last of the Mochicans (It was the frontier then)
(9) Pat Garrett and Billy the Kid
(10) EL Dorado
It gets difficult , back to that list at a later date!!!.
Not too sure after seven.
Some great clips of the above on you tube.
Photo: The Porchfields Trim. 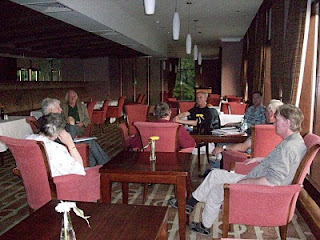 The Meath Writers' Circle held their monthly meeting at The Castle Hotel in Trim tonight with about nine in attendance. Must be the warm summer evenings as a few had gone walkabout, but not withstanding the above, it was an interesting mix of both traditional and modern verse with Pat Bennet reading a fine poem called "A Place For Us" while Isobel read a lovely piece called "No Need" about children leaving home. Jimmy Peppard then entertained us with some of his fine ballads, and Jimmy knows how to write ballads, while there was even a mention or two of something called The Battle of The Books. Tommy Murray read his poem called "The Yeti" which is published in this months' edition of "Riposte" the poetry broadsheet, and well worth a look. The next meeting is something of a rehearsal and is on Friday the 18th of June, and before I go there are poetry readings in both Athboy and Kells. See Meath Writers' Circle website for details of above where info is sure to be posted.
Photo: Some of those in attendance in the comfort of the lounge.
Posted by Frank at 3:08 PM 8 comments: