The closing date for this one is the 30th of June and the entry fee is €5 or €10 for three entries. The poets name is not to appear on the entry/poem and poems must not exceed 40 lines in total. (Excluding title). Posted entries should be typed and printed in black ink on A4 paper at a minimum type size of 12 pt. You can submit by post or email and if by email attach your entry as a pdf or word document. Payment can be made by cheque or postal order, or online via PayPal. Cheques: make payable to Rush Events Committee. Paypal: www.paypal.ie.

Each entrant should supply their full name, postal address, telephone number, email address and an 80 word biography on a separate page to entry.
The Rush Poetry Competition 2017 is being organised as part of the annual Rush Harbour Festival. 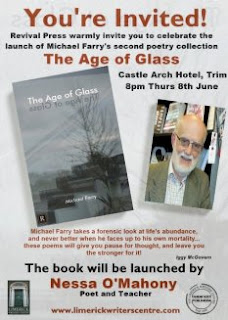 Michael Farry invites all to the launch of his second poetry collection in the Castle Arch Hotel Trim on Thursday the 8th of June at 8 pm. Published by the Revival Press Limerick it's sure to be an interesting evening and further information on the book and life of the author can be had if you click on the link to the right. A founder member of The Boyne Writers Group and former editor of their literary magazine, "Boyne Berries" he has won many awards for his writing and is published widely. Nessa O' Mahony will launch the book on the night and all are welcome.

James Clarence Mangan was born in 1803 and died on the 20th of June in 1849. His mother Catherine Smith came from the parish of Kiltale in County Meath and his father James Mangan was a hedge school teacher from Limerick. His most well known poem, "Dark Rosaleen" was a standard in schoolbooks back in the sixties and according to "A History of Kiltale" which was published in 2000, he is said to have written it on "Long's Hill". Held in high regard by writers such as Yeats and Joyce he was one of the most important poets of the nineteenth century and given his local connections strange that there is nothing here to mark that. But then you could say that of any number of others. We are not good at remembering. With thanks to to "Storymap Dublin" who loaded and youtube.
Posted by Frank at 2:25 PM No comments:

An Tobar/Poetry for Pleasure May 2017!

An Tobar/Poetry for Pleasure May 2017!

The theme of this month's meeting of the Poetry for Pleasure Group at Ardbraccan was Northern poets or poems relating to the province in some way. Seamus Heaney seemed to be a favourite for many as was Patrick Kavanagh but others included Michael Harding, Derek Mahon, William Allingham, Bobby Sands, Mike Martin and Anthony Cronin. One or two others got a mention and I'll have to chase them down, but for now! On what was a beautiful evening at least fifteen people turned out and the next get together will be on Tuesday the 20th of June when the theme will be women writers or perhaps poems about women? Anyway sure to be interesting.

Those other poets who got a mention on the night were Madge Herron and Pheme Glass!
Posted by Frank at 2:31 PM No comments:

www.yeovilprize.co.uk
Posted by Frank at 2:00 PM No comments:

Rod Stewart - I Was Only Joking

Great song, great lyrics, from a studio version (Foot Loose & Fancy Free 1977). Loaded by TrixxyKatt and with thanks to youtube.
Posted by Frank at 2:32 PM No comments:

About thirteen people turned out last Thursday night for the monthly meeting of The Meath Writers' Circle in the Trim Castle Hotel with a number of items discussed and poems and stories read. The annual magazine needs a lot more material in and hopefully it all comes together by the end of summer. This will be the third issue to date and while there is no overall theme there are any number of anniversaries out there including Ledwidge, Swift, Jane Austen, the Russian Revolution, the Fenian Proclamation, Thomas Ashe, JFK, The Battle of Messines WW1, Ernesto "Che" Guevara, Martin Luther's Ninety Five Theses, Amelia Earhart, Mary Queen of Scots, Sputnik, the Hindenburg and anything you might think of on the lighter side. Also of local note and by the time the magazine comes out it will be the 50th anniversary of the Scurlogstown Olympiad at the Old Mill, so nice to get some material on that. Thirty years also since the Joshua Tree so plenty to write about.


The closing date for this one is 12 noon on Monday the 26th of June so plenty of time to get something in. There is a first prize of €400 plus attendance at a designated writing course at the Molly Keane Writers Retreat, Ardmore in 2018. The competition is open to all writers living on the island of Ireland and the prize will be presented at the Imagine Arts Festival incorporating the Waterford Writers Weekend which runs from October the 19th to the 29th in venues throughout Waterford city and county.

The prize has emerged from the influence of the late Waterford writer Seán Dunne and there is no entry fee or age restrictions. Postal entries only and there should be no more than one entry per person submitted. There are a number of entry conditions and an entry form to be downloaded so be sure to check them out. There is a second prize of €300 and a third one of €200 and the winners will be requested to read their entry at the presentation event in Waterford.

Original entries only and they must not have been previously published or printed online. Entries which have received awards in other competitions or have been submitted elsewhere are ineligible. Entries to: The Waterford Poetry Prize 2017, The Arts Office, Waterford City & County Council, Civic Offices, Dungarvan, Co. Waterford.