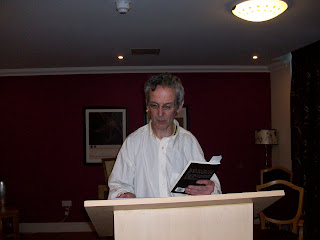 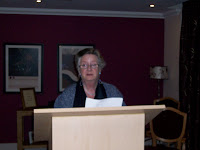 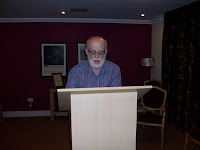 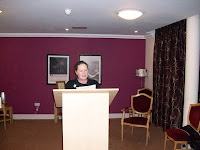 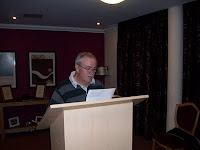 James Linnane a member of both The Meath Writers' Circle and the others was the guest reader at the Coffee Shop venue in the Knightsbridge Village last night. And very comfortable as well, especially  for those who like to relax between stories, or poems, not that the readings were geared towards that end. Something of a mad humour about. James read extracts from his recent publication "The Life And Times Of A Gotcha" as well as from his first book which was titled "Never Take An Irishman Seriously Unless He's Armed" so you can see where the humour was heading. This was published when he was in New York and is now sadly out of print. He also read a couple of poems which were excellent, especially the first one. Other readers on the night included members of both the Boyne Writers, Meath Writers, and not forgetting The Meath Cavan Lit-Lab or should that be the other way around. Michael Farry's poem about Manchester United and the air disaster is one to remember. Links to Michael Farry, Orla Fay, and Michael Shiels who were all taking photographs over on the right. Worth a look!
Photos: James Linnane, Honor Duff, Michael Farry, Orla Fay and Michael (Sheriff) Shiels.
Posted by Frank at 6:22 AM No comments:

Following on from a discussion we had at The Meath Writers' Circle, and something I've been meaning to get back to, I went looking for some of the videos posted on youtube that relate in some way to the Irish Involvement in the American Civil War. TG4 had a number of programs on recently and the National Museum of Ireland had a weekend of special events to mark its 150th anniversary and to explore the role of the Irish in the war. I settled for the piece above and must post a clip from the movie "Gods And Generals". So with thanks to youtube and "showtunestarpower" for the above.
Posted by Frank at 3:12 PM No comments: 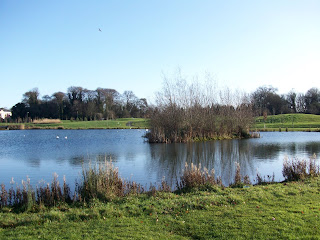 Adding to the comment on the "Meath Books" website, a very Happy Easter to everyone, and having said that I'm still reading a number of books at the same time and dipping in and out as the mood takes me though I've finished "The Blind Watchmaker". Very interesting this theory of  "natural selection, of intermediate steps and slow gradual cumulative selection as the ultimate explanation for our existence" and argument proven perhaps, but sure I'd want to know why? Watching "Master and Commander"  or something along those lines a number of years back I wrote the following. A humorous take, or intended as such, but then comedy is never very far from the other side of the coin. Or was that the parrot in Treasure Island! Pieces of eight!

Pressed,
To account
There was no use
Flogging a dead horse
The truth was out there somewhere
Birds feathering their nests
And the frogs spawning
Enough latitude
To get you to
The bar.

Dawns...
Spent numbering the leaves
Reported sightings.
Clambering over the rocks
And the spray billowing up
Niche and crag
The skeleton coastlines
Staring into an
Abyss!

Port side out
And starboard home
It was beat to quarters
Dog eat dog
And the lash!

And it was turtles,
All the way
Down! 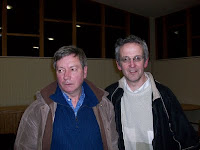 The guest reader at the next open mic session in the Knightsbridge Village Hall on Thursday the 28th of April will be James Linnane. A member of both "The Boyne Writers' Group" and "The Meath Writers' Circle", James has published two books to date, and his most recent offering "The Life And Times Of A Gotcha" is an hilarious  account of his days spent working as a security guard on the industrial sites and building complexes around the greater Dublin area. Launched recently at the Coachman's Pub in Ballivor there are sure to be copies available on the night and more information about the book can be found at http://www.theauthorsfriend.com/ or if you scroll back a page or two on this site. It also got a mention on Michael Farry's blog a while back. James writes poetry as well and one of his poems is included in the latest copy of the Boyne Berries literary magazine. Admission is €5 Euro with tea and biscuits served afterwards.
Photo: Kieran Furey and James Linnane at Boyne Readings.
Posted by Frank at 3:15 PM 4 comments:

One of Meath's best known poets, Michael Farry is a founder member of The Boyne Writers' Group and editor of their literary magazine "Boyne Berries". A winner of numerous awards for his poetry and widely published, here he reads through nine of his poems, and ranges through subjects as diverse as stamp collecting, the truth, asking for directions, my sporting life, fish and chips and a number of others. And of course and not forgetting "High Noon" though Katy only comes in for a minor credit. This is a very interesting and entertaining reading and well worth a look. He has his own blogsite which is very informative, if you just click on the link opposite. With thanks to youtube and "On The Nail Readings".
Posted by Frank at 5:18 PM 4 comments:

Listening to "The History Show" on FM106-108 a while back I came across an exert from this speech by Marlon Brando and if you can beat this you're doing well. The film is from 1953 and it is Brando at his very best. It is also included in "Speeches that changed the world" ( Bounty Books 2006) and from that source while they credit good ole Will Shakespeare they also acknowledge the writings of Dion Cassius and Plutarch. Anyway, just sit back and enjoy! With thanks to youtube and "Pochido" who posted it
Posted by Frank at 3:22 PM 8 comments: 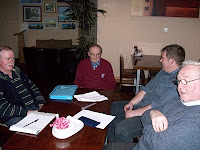 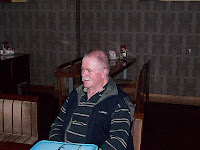 On what was a beautiful evening The Meath Writers' Circle held their monthly meeting at The Castle Hotel in Trim last night. And if a few members were conspicuous by their absence a couple of new ones arrived in their stead. It was a night of long poems and short poems and one very interesting one with biblical reference, angels and that. Others who were not confined to the truth, or the confines of anything, told tales that chill and all in all it was a very interesting evening, with no mention of the others except in glowing terms, though someone started coughing at the end. Any other news was that James Linnane launched  his book "The Life And Times Of A Gotcha" in Ballivor and hopefully a great night was had by all.  "Just as a correction to the above I see that James launched his book at The Coachman's Pub in Ballivor on Friday night." 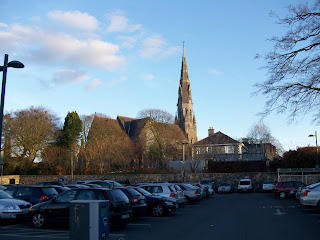 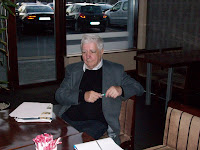 Photos: One of Meath's most prominent landmarks: The spire of the Roman Catholic Church.
Tommy Murray, Michael Shiels, Sean Kane, Paul Martin, and Willie G. Hodgins.
﻿
Posted by Frank at 5:24 AM 2 comments:

Reading through a number of books at the moment, "The Blind Watchmaker" (Still!), Karen Armstrong's "A History of God" and Patrick Kelleher's "One Mortal Night", more on that at a later date. Karen Armstrong's book is one of those that if you haven't got it, and it may be out of print or something, try searching. I haven't finished it yet but she ends with a poem called "The Darkling Thrush" by Thomas Hardy and that's a good enough reason to go out and get a copy anyway. But, more things in heaven and earth... Apart from that I'm reading The Sunday Times or working my way through it on a Monday. The photo to the right is from google images and brings me to "Fag An Bealach"  the second part of which was on TG4 last week, and reminds me of a conversation we had at The Meath Writers' Circle a while back about the Irish at Fredricksburg and that a number of local men had been involved. But more on that later as well. There's some interesting film up on youtube for anyone that's interested.
Picture from Google Images.
Posted by Frank at 6:34 AM No comments:

Tommy Murray at the Delish in Cavan Part 2

This is part two of Tommy Murray reading at The Delish in Cavan for the launch of the Moth Magazine. Touching on everything from geraniums to a certain lottery he reads through some of his best poems, and demonstrates once again that when it comes to an eye for observation and more than a little humour there are few better.