Another Sunday morning and reeling through the newsfeeds I came across a reference to a programme on RTE about the subject above and curiosity getting the better of me I had to go look-see as they say and I wonder how they arrived at their final list. Now there are only so many hours in the day and I didn't read why but I'd contend there are glaring omissions from that list. Some of those included aren't Irish at all and while you'd get hard to argue with any list that includes Eric Bogle, perhaps the greatest writer of folk songs of them all, though some would argue for Richard Thompson, I believe Eric is Scottish/Australian and I believe Robbie Burns who is Scottish has some claim to, "The Parting Glass". Now for the Omissions and the importance of them for many reasons ~ Go figure!

Where is Christy Moore's, "Viva La Quinta Brigada, They Never Came Home?"  Where is Jimmy MacCarthy's, "Bright Blue Rose, Missing You?" Where is Dominic Behan's, "Building Up and Tearing England Down?" and a number of others of his as well not to mention his brother. Where is Van Morrison's, "Coney Island?" Where is The Clancy Brothers and Tommy Makem's, "We Want No Irish Here?" Look at the expression on President Kennedy's face when they sang it! And that's just some of them! If you are going to do a programme on "Ireland's Favourite Folk Songs" then you'll need a longer list and another timeframe and perhaps another working guide.

Two Hours Later: I did go back and read "How we picked the Shortlist" and  obviously there are people there with different levels of interest in different fields of interest and everything is a compromise at the end of the day anyway but the definition of favourite from the dictionary reduces down to something of what one likes most, or that is expected to win and since the qualifier here is "Ireland" then surely the prize must go to Pete St. John's "The Fields of Athenry". Game over if you'll pardon the pun. If you start dragging in other criteria I might as well add a personal favourite, Steve Earle's "Dixieland" at least it's some recognition of the hundreds of thousands of Irishmen who fought in the American Civil War. About the same number as fought in the first world war but there is not a monument or remembrance to be seen in recognition of them anywhere. (Paddy's Lamentations ~ Sinéad O' Connor, Mary Black)  Be careful of your lists folks and what you define to be 'Favourite'.


The theme for last Tuesday night's meeting was on the subject of dreams, as was suggested by Carol Owens and whose own contribution was very interesting indeed. Though there was a very wide interpretation with regard to the subject matter, whether conscious or otherwise. Some to wishful thinking in whatever sense and others to a little more philosophical and some on the subject matter itself. The night started off with a poem by Helen Waddell, "I Shall not go to Heaven when I Die" followed by "Country Child in Spring" by Myra Lalor. Eugene Kane read "My Dream" and Levis Kapchanga from Kenya read his own poem "Mind this Day". Eugene Field's "Dutch Lullaby" was next followed by Maureen Kerrigan reading her own piece "Fox". Willie G. Hodgins also read one on his own poems called "An Aged Man's Dream" and I myself read not one but two which could have slipped in under another heading but however! "In Some Divide" and " The Companion Set". Carol Owen's poem "A Dream" really kept to the script and a lot of depth there. An extract from "The Village Schoolmaster" by Oliver Goldsmith was next followed by "Lullaby" by Francis Ledwidge which also got a reading. Hope the notes held out! The night finished off with "Best Romance" by Willie and then out to tea and refreshments. Jim Owens was chairperson on the night.

The theme for next month is: "Schooldays". All welcome!
Posted by Frank at 3:41 AM No comments: 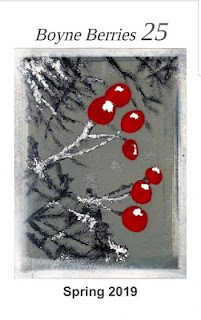 With the rain coming down outside, a good time for a read through on what is an excellent production with some of the best known writers in Ireland here and more than a few from much further afield. It really is quite a collection and their twenty fifth in all so congratulations all round. On a once through and you read till you stop the first poem to make me pull over * was, "To my sister" by Meadhbh MacCarthy which has more than a little charm and a lovely surprise. "Still Life with Morning" by Orla Fay is one of the finest descriptive poems I've read  and would or should be a prize winner anywhere. "I never learned to stay" by Susan Millar DuMars is more than a fine piece of work and that's how the light gets in as they say. Who said that? Staying on the same theme almost, "A Butterfly's Blind Spot" comes with a little insight and certain observation and is an excellent piece though I'd question the double spacing. Original and good. As is the one that follows by Kate Dempsey, "As They Left the Moon at Taurus-Littrow". "O Sacrament Most Holy" by Anne Tannam is another charming piece and "Rose of my Heart" by Ron Whitehead is a piece of fine writing. I really enjoyed, "Mabel in St. John's Harbour" by Carolyne Van Der Meer and if I had to cherry pick it was that or the editor. Finally the last poem by Frances Browne, " Silver" required reading. More sense than I... Who said that? And one for those who can't stop! Great piece also in the Prose section, "Empty Frames" by Olivia Fitzsimons. Now the rain has eased off and I must go! To purchase a copy, link to the right: Boyne Berries. And you should and perhaps if I'd read on another day...


Indulging myself with an old favourite. Believe it was written or has some influence from the time  he spent at Oxford University and must be about the only time a reference to the London Underground made it onto a country album. But Kristofferson is one fine poet. Many versions on Youtube but Willie Nelson is perhaps the finest country singer out there. Posted by "Mostly Brenda" and with thanks for the share button.
Posted by Frank at 1:31 PM No comments: 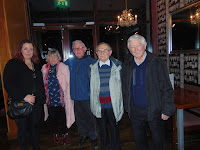 Last night's meeting of the group was a night of some great storytelling and poetry, both old and new. After members read their own pieces they were invited to dip into a selection of both Junior and Leaving Certificate poems and select a poem or two they considered a favourite from their schooldays; or even something they just happened upon; or even something from after they were long finished at school! This triggered some interesting asides and though we finished up after a couple of hours it could have gone on for much longer. On what was a night of torrential rain only a small number turned out but good goods as they say.
Posted by Frank at 7:17 AM No comments: