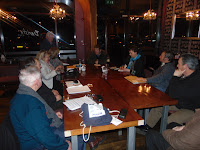 About twelve people turned out last night for the April meeting of The Meath Writers' Circle, with a little time given over to what might or might not be included in this year's magazine. Allowing for a number of anniversaries it was decided to leave it open to the members as to what they might like to contribute and a deadline of late July was agreed upon for last submissions. A number of poems and articles were read and the night ended with a few songs, though four part harmonies or not Sean managed to steal the show with a piece from Dylan Thomas, (Eli Jenkin's Prayer) though what will be will be was creeping up on his left. A reminder that the National Poetry Day readings organized by The Boyne Writers are in the Castle Arch Hotel in Trim on Thursday the 27th of April at 8 pm and the An Tobar/Poetry for Pleasure readings on Tuesday the 18th at 7.30 pm. Also there is an event in the Trim Castle Hotel with the Sands Brothers on Friday the 21st in aid of Multiple Sclerosis.
Posted by Frank at 1:43 PM