From the Plough to the Stars/Book Launch!

From the Plough to the Stars/Book Launch! 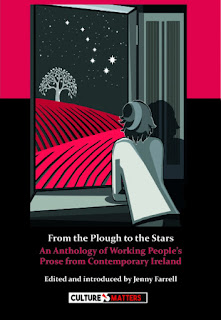 Edited and introduced by Jenny Farrell and with a foreword by Gerry Murphy, President of  the Irish Congress of Trade Unions the above collection was launched on Monday the 16th of November by Clare Daly MEP whose own contribution or launch notes were perhaps the best I've heard. A follow up volume to The Children of the Nation this book includes just about everything from memoir to the short story or blog entry and reflects on every aspect of the working life. That said I'm still reading through, having started with Gráinne Daly's, The Dublin - Meath Saga from 1991 - and having included a sporting section in our own magazine would love to have had this one. Be careful what you wish for. There are over two hundred pages here so it is no small book. It actually ends on a poem by Máire Dinny Wren, The Common People which follows her flash fiction piece written in Irish. The introduction by Jenny Farrell ends in the words of James Connolly describing the Starry Plough banner:
A free Ireland will control its own destiny, from the plough to the stars.
See Press Release below.
Priced at €12/£11 it is available from the Culture Matters website.

Labels: An Anthology of Working People's Prose from Contemporary Ireland., From the Plough the Stars