The Life And Times Of A "Gotcha"

The Life And Times Of A "Gotcha"
By James Linnane. 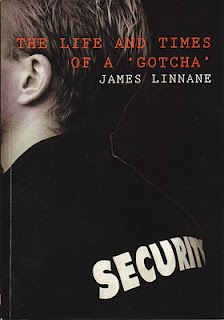 As the title suggests this is an account of the life and times of a few good men and more than a few you'd be well advised to give a wide berth to. An often hilarious and sometimes blow by blow account of his years spent guarding the building sites and bar-rooms and car-parks and quarries and whatever you're having yourself. And sometimes they were having it themselves. A sub-set of characters who refused to be tied to the ordinary and paid for it in long hours and badly paid shifts. James Linnane captures both the tedium and boredom and the endless hours and you wonder on just what got left out. This would make great television. Move over Mrs Brown! A member of both The Meath Writers' Circle and The Boyne Writers Group, James may be gathering information for a third book! More information on this one though can be had over on Michael Farry's site. Just click on the link opposite. The book is published by http://www.authorsfriend.com/ and retails at €10 Euro. See website!
Photo: Bookcover.
Posted by Frank at 2:58 PM

Labels: The Life And Times Of A "Gotcha" www.TAFpublishing.com